The relevance to filter to 0,5 micron: Pre coat technology 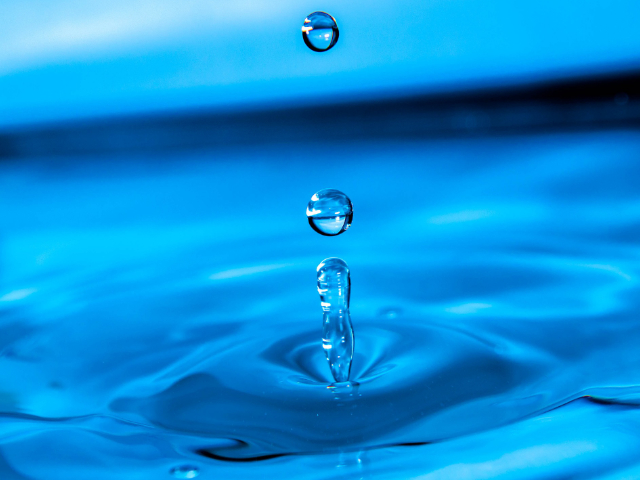 The filtering elements for water treatment for human consumption offer a very wide interval of the filtering graduation, i.e the capacity of removing suspended and dissolved substances. There are different technologies: you can pass from a sediment filter at 50 micron filtering graduation, to the osmotic membrane that can remove dissolved parcels into water with dimension less than 0,001 micron

In this wide interval the value of 0,5 micron regardless of the nature of the filtering element, represent a value partularly significant since it thing that, instead, can’t assicure a filter with a major porosity

For example the Giarda and the Cryptosporidium are emerging pathogens very diffuse in superficial water, characterized by a particular resistance to the traditional disinfectants based on Chlorine and can cause intestinal infections; these protozoa, which have dimensions of the order of micron effectively detained by filtering systems with submicrometric filtering graduation
The same thing goes to asbestos, even if the known danger concerns the inhalation, the same is not excluded concerning the ingestion through water, thing that regularly happens considering that in many traits the aqueducts pipes are made of this material.

Concerning the activated carbon technology require specify that there are different filter tipology that adjusted for raw material they are different for the implementation of the filtering element and are distinguished in: GAC (granular activated carbon), Carbon block (extruded), Pre coat. There are also carbon filters associated with polysulfon-hollow membranes

The GAC is generally associated with a fine stitch to prevent the release of carbon into the water, that with this bulk configuration has no defined filtering graduation.
A Carbon Block can be produced with different technologies: extruded or synthesized.
In the first case it is a mixture of carbon and polymer which is heated and pushed into a extruder, the minimun porosity achievable with this technic is over 5 micron; the second proceeding is made of carbon powder synthesized with polymeric binders at high pressure and temperature, with this procedure the candle, if high-quality one, can guarantee a porosity uniform and working as filter for particulate with graduation filtering generally including from 1 to 5 micron. A Pre Coat filter is made of a membrane fine at 0,5 micron on which shall be lodged a powder of activated carbon (PAC) of high quality.

The surface of filtration of pre coat membrane is 6 times bigger than a extruded carbon candle one, it allow a significant autonomy of tap water filtration without significant pressure drop.

Pre coat technology is the only one that allow to offer the activated carbon vantages with the submicrometric filtration, which can guarantee the removal of every kind of parcel existing into the water with dimension not bigger than 0,5 micron.

If the nature of the filtering elements and the relative performance are defined from the technical point of view, the same doesn’t happen on the business plan area where the operative characteristics of some systems are forced for obvious marketing reasons; this is the case of some Carbon Block filters on whose etiquettes the filtering characteristics are declared equal to Pre coat technology, an impropriety that we wanted to point out with the simple following experiment. 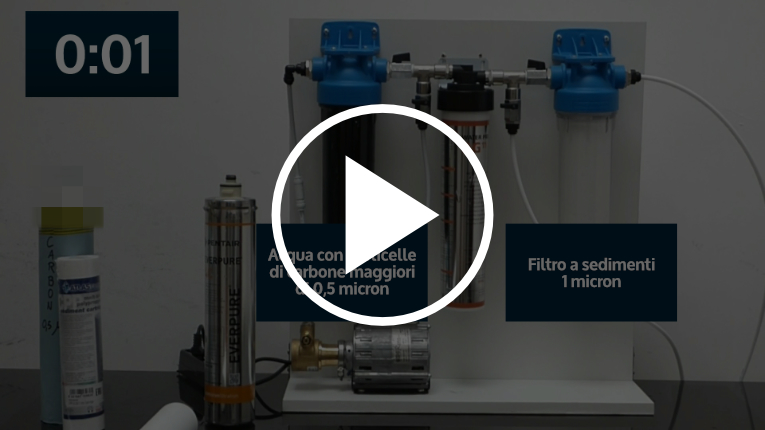 Test description:
To verify the carbon blocks’ porosity we created a pilot plant made of:

The hydraulic Ts are used to modify the hydraulic circuit and drive the clear water flux into the filter during the starting purging phase, for the time estabilished by the producer.

When the purging phase is ended the water rich in powders contained in the first cupi is pushed to the tested carbon filter, what’s not detained pass and is collected downstream on the sediment filter.

The Water Pro and Everpure filter, both employing pre coat technology, pass positively the test, infact at the end of the test the sediment cartridge is still clear; on the contrary the anonymous carbon block filter let the powder carbon pass, which dirty the sediment filter, showing less efficiency in particulate removing.

New guidelines for waters intended at human consumption what is changing with the new European directive?